(Written by Power Pen on June 30, 2016 edited of the Green-feathered Parrot bird Macaw)

(Editorial) As expected the next episode of "Gravel travel" needed a long time. Although our excellent star reporter Power Pen did again all he could for our valued readers of the travel magazine, he could not provide the interview previously.

Power Pen (PP): Back from the strange island of North Cyprus you landed in Mersin. By that you could skip a piece of land which you not needed to drive.

David Brandenberger (DB): That was actually a pretty flat piece of land with still some archaeological sites, so not just a win. In Mersin, I could admire still archaeological remains and an old colonnaded Street. I also changed the cassette in the wheel to make the shifting gears easier.

PP: On the short journey to Tarsus you had an accident. What happened?

DB: After a short break I wanted to sit back, stuck with one leg and slid off with the other. I fell like a sack on the gravel surface and lavished myself on the right wrist - in the same place where I had the surgery last year. For the journey to Tarsus, I could use the hand only limited. That's why I stayed there for a few days.

PP: Tarsus is so rich in history: it is the place where Paul originated and Daniel the Prophet is buried there.

DB: Well-researched, Power! In addition, I visited the cave of the seven sleepers and the cave of Taskuyu nearby; sadly, too many stalactites were damaged.

PP: Then the announced records fell!

DB: It was not that easy. First, I had to cross a pass from sea level until 1370 m, and just before the trip reached the end the Solatrike II made 10'000 km. I have kept the whole trip in small film sequences and cut together a short video. But 130 metres above sea level, I had to replace the throttle for the front engine, which cost me time and some nerves.

DB: Those were equal to two. The next day a good road led from Pozanti up pretty evenly through a nice area, so that I could ride the most part with the rear motor. But it wouldn't stop to rise. I drove up from 800 m to 1460 m. Now, this is the current altitude record of the Solatrike II. It's not much now, but so far I, wasn’t higher.

PP: You could have, but you just didn’t want.

DB: I could avoid it until now and drive all around. But it was not done by then, because I had still a long ride in front of me. First a straightaway road down to a plain, which then slowly rose again. At the end of the day, I had the daily distance of 170km on the odometer. The Odyssey in Aksaray until I found the hostel, which had no place then, is of course included.

PP: Other people drive that every day, what's the big deal?

DB: It was the longest distance for one day for me so far and I need it not every day. I want to see something of the landscape and don’t want to “eat” only km. But both videos are already uploaded to watch.

PP: There you can see also, that you had to fight fairly with crosswind in the plain. No problem with the Solatrike?

DB: This is no problem for the Solatrike, which offers not so much attack surface, only the flags bow like bananas. For me, the constant wind in the ears was rather tedious and I had to recover a day in Aksaray.

PP: I suppose that you made a pilgrimage to the archaeological museum and visited the city.

DB: Exactly, you were with me! In the Museum, I received a tip and decided to change my route. So, I went to the Ihlara Valley, all day with the Vulkan Hasan Dagi in the field of vision. In Selime, I set up my tent next to the River in the only campground in the place. I had also the feeling to be the first and only camper there. But before, I went to see the Cathedral of Selime, which is carved into the rock. Like many of the same churches in Cappadocia, also this was a victim of erosion and large parts of the whole complex are broken away already. Nevertheless, it is still very impressive and the time flies until you have seen all the rooms.

PP: The whole valley is so full of these churches that were carved into the rocks to hide from the raids.

DB: The monks had built a number of monasteries in the Valley. Today, they are destroyed by the erosion in part and others no longer accessible. A number of churches can still be visited, even if they are quite run down. Unfortunately, also the wall paintings are pretty damaged by vandalism. That was in the past by the Arab raids and today by tourists. The monastery's complexes date back to the 6th to the 13th century which the most are to visit at Ihlara. Of course, I visited all of them and hiked along the Valley to visit the other churches as well. A nice hiking trail led down through the Valley next to the river and ended at Selime.

PP: But there you still were not satisfied and went even further on exploring.

DB: It was a lovely day and the Sun was good to see even the fairy chimneys up close. Into the eroded rocks cones were chiselled homes and churches. Of course, many parts were uncovered by erosion, so that the higher-lying residential areas are already laid open. After this beautiful detour I went back again to the main road, which led me to Nevsehir. There, I stayed another day to visit the local museum.

PP: (rolls eyes) When he doesn’t visit a Museum? But then you left to the main attraction in Cappadocia: Göreme.

DB: I was on the way then, as I was intercepted at the junction to Uchisar by reporters. Right there as I had thought that, meanwhile, probably all media had reported about me, reporters stood again there. They accompanied me up to Uçhisar and wanted to interview me actually in Göreme, but I wanted first to see the Uchisar fortress. So, they decided to do the interview there. I had to tell my mileage route off the cuff and my other plans. Then, they wrote everything again off the archive and the good footage wasn’t published only the worst sequence. I had excellent views of Göreme and the surrounding area off the former fortress, where even the biggest parts are eroded away.

PP: Finally, you went then to Göreme.

DB: Before I left Uchisar I met Simon and Ombeline from France, who I met in the evening at the campsite again. They settled themselves in the same tent space, to keep some company. I was amazed when I came back from short excursions in the open-air Museum of Göreme and met them again. Also, Giona and Uliana had travelled there with their minivan. Giona, a Swiss and Uliana from Ukraine are on the way to Mongolia. We formed a small group of five, changed the campsite once and hiked through the rugged landscape. On our explorations we discovered narrow canyons, squeezed through old tunnels, which abruptly ended and we had to climb over the rocks.

PP: Are there no official trails?

DB: Sure, there are, but they are sometimes not so well signposted and we went astray easily. It was also difficult to orient ourselves in these valleys. Although, we were finally in the Rose- and Red Valley, we had found out later on the maps that we had arrived in the right Valleys. The weather was very changeable with lots of rain in the next few days and so the excursions were limited to only short trips between the rain showers. Or I had to find a shelter every time. As a result, I made my excursions alone. One led me first to the Görkündere Valley where I had to wait passing a thunderstorm and then I changed Kris-cross to the Zemi Valley, which I wandered through. That was getting narrower and at the end the path led back on a plateau. It was at some point once too boring for me and I went down into the Iceri dere Valley. First, I followed a path, but this came suddenly to an end and I struggled through thick Brambles, until I found a rise.

PP: Isn’t that dangerous to wander alone through untracked area?

DB: It's not quite harmless, but until now I came back always safely. Between the rain showers I've visited the next village of Cavusin, whose caves and rock formations and I made a trip to the Love Valley. That is named like that because the rock formations remind of penises. I found a nice place there and made a sketch. As the clouds covered the sky, I packed my things and was back at the campsite just in time. On a rainy day Giona and Uliana took me with to the underground city in Kayamakli. There were carved up to seven floors into the rocks to hide the population of an entire city. Now you can visit three of them in this rock labyrinth.

PP: You went in the air as well?

DB: I booked a balloon ride over Göreme together with Giona and Uliana. We had to get up early in the morning, got a breakfast in one of the cave hotels and at half past five we climbed into the balloon basket. The trip over the rock needles had been fairly close. We drove around slightly too long just above the ground in a boring area. The winds were probably somewhat unfavourable and that's why we had to reach a place somewhere else to ascend. Then 400 m above the ground we had pretty views of the Vulkan Erciyes Dagi, the different valleys of Göreme and the surrounding area. After 1 h 15 min we ended up on a trailer and drove to a place, to take the balloon down. Some impressions of Cappadocia are summarised in a short video, including the ballooning.

PP: You left Göreme on the same day.

DB: You could spend more days and make many walks there, but I was getting expected.

PP: Who was expecting you, where and why is told in the next blog. Sincerely yours, Power Pen. 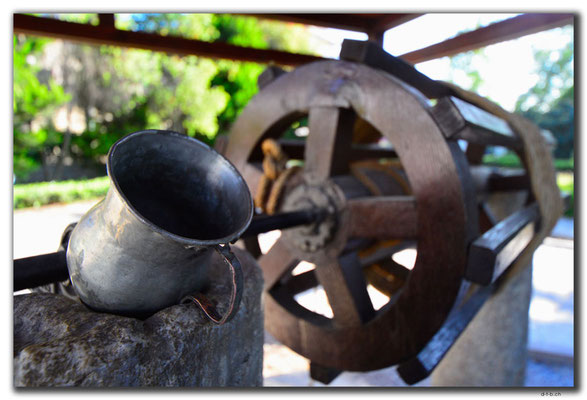 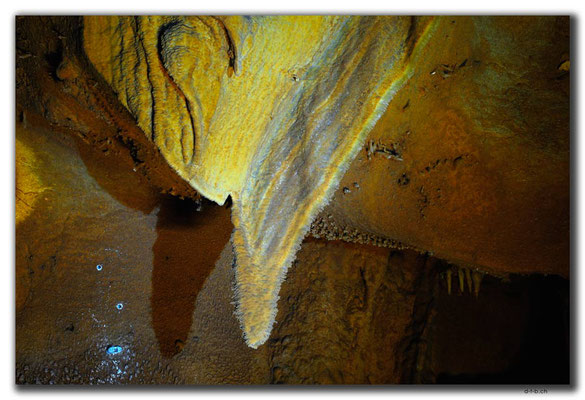 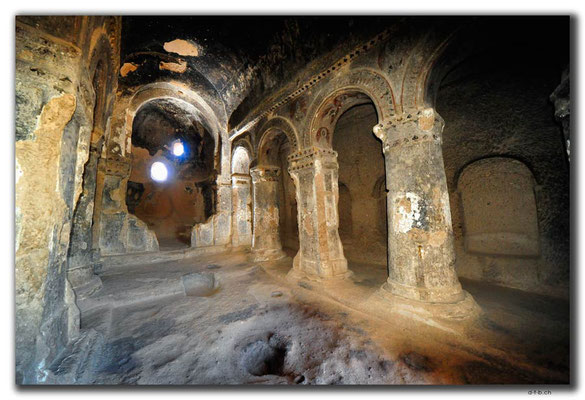 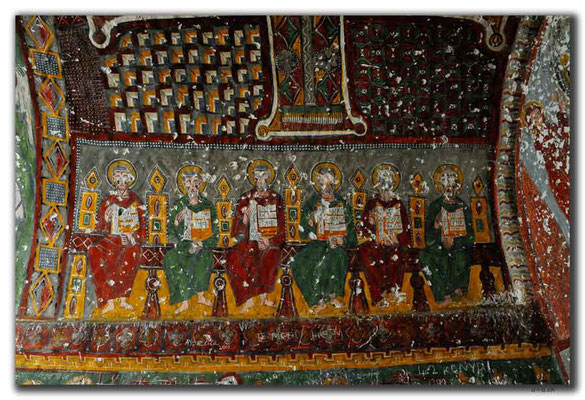 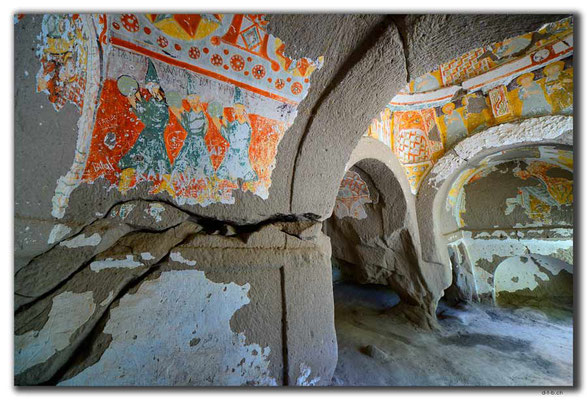 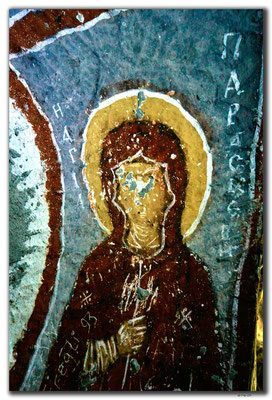 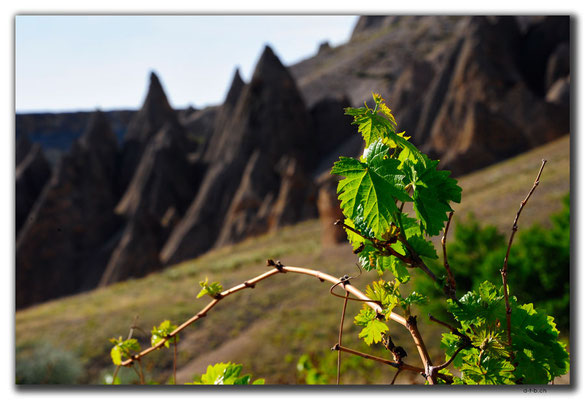 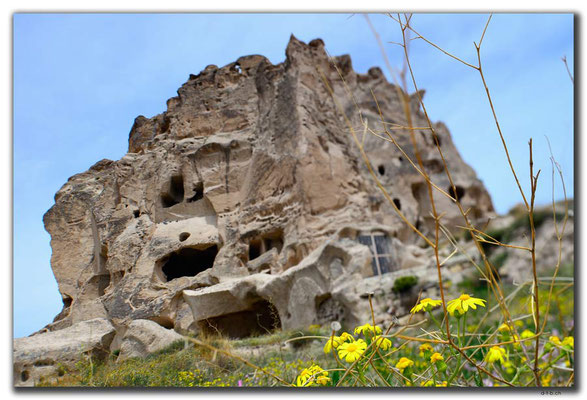 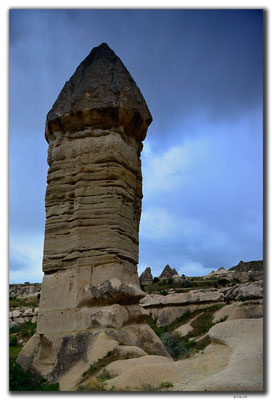 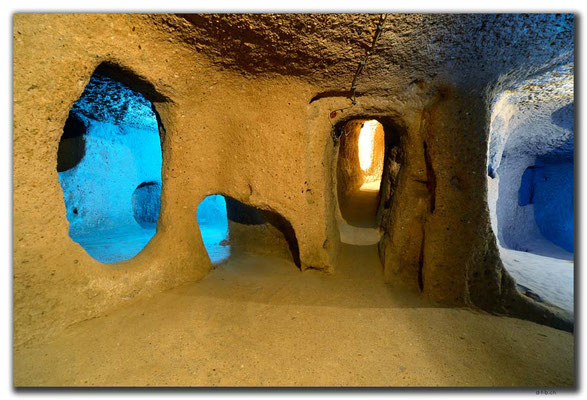 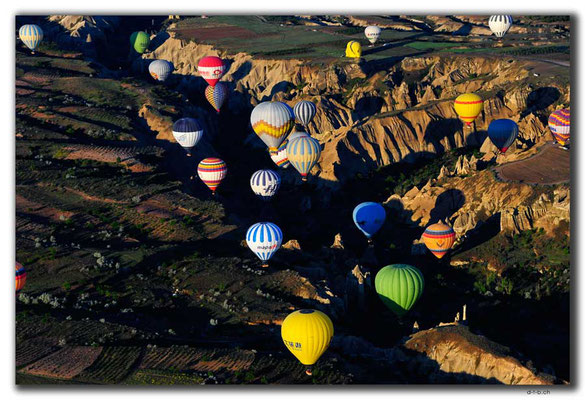 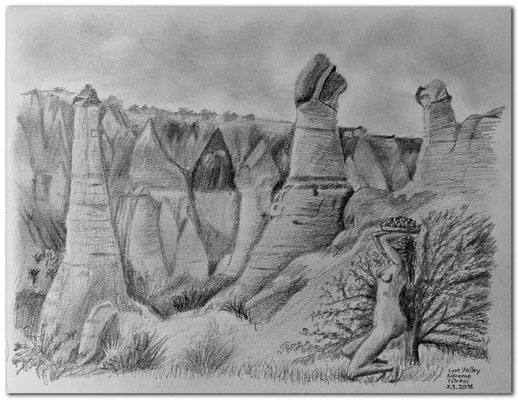 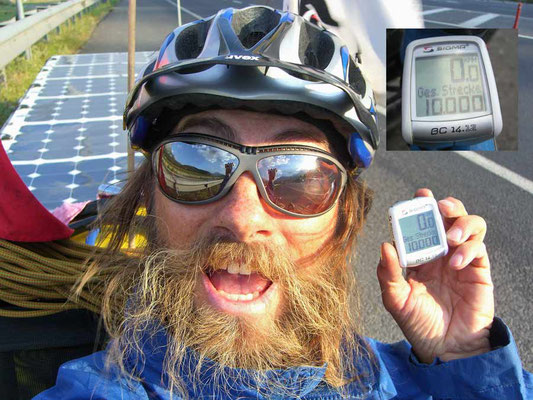 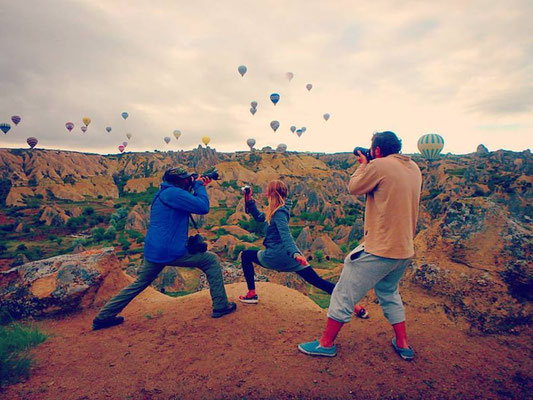 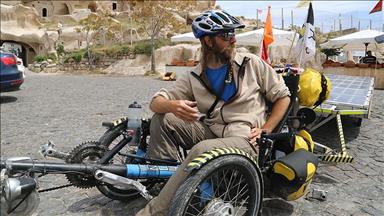